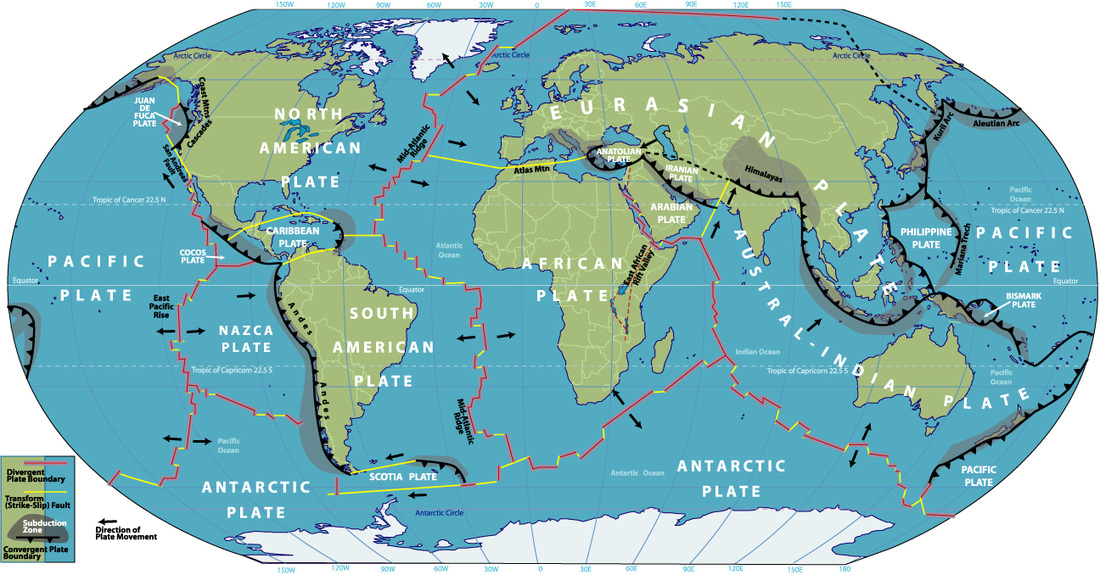 Plate tectonics are the reasons for ocean trench, mountain ranges and volcanoes. They explain all the features and movements of the earth's surface, present and pass.

Plate tectonics are the earth's outer shell that is divided into several plates that soar over the mantle. The plates are a hard and rigid shell compared to the earth's mantle, and this strong outer layer is called the lithosphere.
The force that drives the plate tectonics are the convection currents in the mantle. Hot materials near the earth's core rises, and the colder mantle rock sinks. The convection drives plate tectonics through a combination of posing and spreading at the mid-ocean ridges and pulling and sinking at the subduction zones. This is only what study has shown however, scientists continue to research and debate about the mechanisms forcing the plates to move.
Mid-ocean ridges are gaps between tectonic plates. Magma comes up at the ridges, this forms new ocean crust and shoves the plates apart.

Both the continents and the oceans rest on tectonic plates, which float on the asthenosphere, the heated molten rock below. These plates float around, believed to be driven by convection currents in the asthenosphere, over time, gathering into supercontinents and scattering around again. Tectonic plates move about as fast as a person's fingernails grow, about 5 to 10 cm per year.

The supercontinent, Pangea, existed around 510 to 180 million years ago. The more southern side of the supercontinents is called the Gondwana. Gondwana formed before Pangaea, then became part of Pangaea, and finally broke up after the break up of Pangaea.